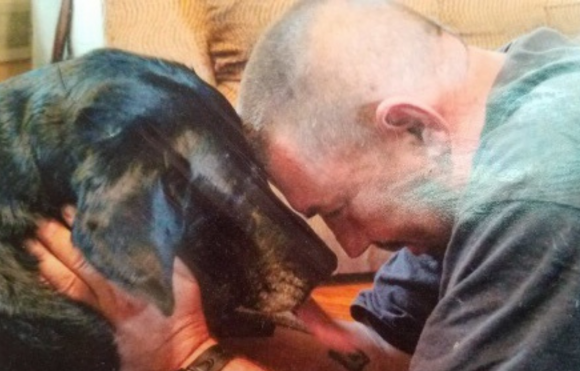 In Team Foster’s efforts to ensure that there is No Hero Left Behind™, we are regularly reminded that the definition of heroism is far-reaching and expansive. Today we’d like to celebrate the work of another hero, senior Black Labrador Sgt. Goodwin L518.

As a puppy in 2007, Sgt. Goodwin began training to work as an Improvised Explosive Device (IED) Detector Dog with the Marine Corps. In that role, Goodwin completed one tour in Iraq, four tours in Afghanistan, and earned the ranking of Sergeant, the highest rank possible for a canine in the United States Marine Corps.

Sgt. Goodwin is named in honor of Ssgt. Anthony Goodwin, a Marine who was killed in action on May 8, 2005. Anthony was a highly decorated Marine who was awarded multiple Purple Hearts and a Bronze Star of Valor posthumously. His tours included Operation Desert Storm in 1991 as well as Operation Iraqi Freedom in 2003 and 2005. A Marine friend of Anthony’s submitted his name to be used for a puppy being trained for the military. Later, Ssgt. Anthony’s mother, Brenda, and brother, Sgt. Greg Goodwin, were notified that a black Labrador Retriever puppy had received the name, “Goodwin L518.”

When a Sgt. Goodwin retired, Brenda and SGT Greg Goodwin were given the opportunity to bring him home. On their way home, the family stopped to visit Anthony’s final resting place at the Arlington National Cemetery. According to Brenda, “[a]s we walked toward Anthony’s grave, Goodwin made a bee-line to the grave and laid down.  He had never met Anthony, he had never been there.”

Team Foster learned of Sgt. Goodwin and the Goodwin family’s story from a GoFundMe campaign started by Lynne Wittkamp. Years of deployments and dangerous work have taken a toll on Sgt. Goodwin. Ms. Wittkamp started the fundraising to help cover Sgt. Goodwin’s increasing medical costs in his senior years.

Although he may not stand on two legs or speak our language, Sgt. Goodwin is a hero in every sense of the word. Following his retirement from the Marine Corps, Sgt. Goodwin continues to serve as a support to Sgt. Greg Goodwin, a retired Army Ranger who served tours in Bosnia and Somalia, as well as a connection to a man dearly missed by his friends and family.

After hearing and connecting with SGT Greg Goodwin, Sgt. Goodwin L518, and Ssgt. Anthony Goodwin, Team Foster decided to assist the Goodwin family by covering all of Sgt. Goodwin L518’s medical costs. This includes veterinarian visits, medications, physical therapy and the treatment he needs to improve his health.